Patan is well known as one of the ancient cities of Gujarat. It is blessed with many religious sites including mosques, Jain and Hindu temples. Apart from these, there is Sahastralinga Talav, a reservoir built in 11th century. Today, the site attracts a good number of tourists who visit Patan. 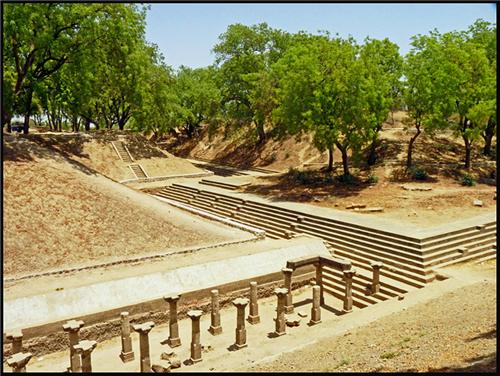 The Sahasralinga Talav was constructed in 1084 by Raja Sidhraj Jai Singh, with a permutation of durable and sturdy material. It was built to collect the river water. The site serves as a great example of architectural brilliance of those times when people were highly skilled. As the name indicates, the site houses a number of holy sculptures and thousand lingas.

As per the legend, during the construction of this tank, Raja Sidhraj Jai Singh fell in love with a beautiful maiden Jasma Odan who belonged to the tank-digger's community. He wanted to marry her. But the woman refused. She committed Sati in order to save her dignity. People say that it is the impact of her curse that dried the tank that once used to be full of water. The talav still stays dry.

The Talav is spread over the range of 5 km. The reservoir is composed with stones and steps to get to the stored water. Along the sides of the tank, many Shiva lingas are engraved. The water filtration system of the tank has an outstanding structure. The water purification plant is inbuilt and that holds the pillars which present a realistic view of the lake along with the functioning of it. An arcade of 48 pillars in this Talav shows the magnificent Temple of Shiva.

People who visit Patan, be it for any reason, visit this site which really interests everyone.