Patan is an Ancient town situated in Ahmedabad on the banks of river “Saraswati”. It was founded by Vanraj Chavda, the ruler of Chavda Dynasty in 746 AD and was the also the capital of Gujarat for almost 600 years. The town depicts traditional gujarati architectural style. It has beautiful houses with carved wooden facades. The city is famous for its various historical monuments like Rani ki Vav, Sahastralinga Talav and beautiful Jain temples. The city is also famous for its woven Patola Sarees. 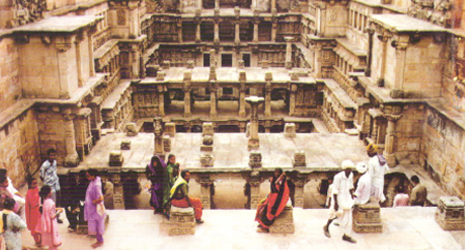 Though the city doesn’t attract much tourist but still it is worth exploring because of its monuments, faded wooden houses and 100 Jain temples which tell their stories in their unique way. The famous jain temple is Panchasara Parasvanath. The other major tourist attracts are as follows:

It is a step well and exhibits great architecture on sculptures. It was made by Queen Udaymati of Solanki Dynasty, in memory of her husband King Bhimdeva. It represents the best of Indian sculptures and also forms a link between a “kunda” and classical step well. It is one of the excellent spot in Patan and should be visited once.
The well has different levels and each level is adorned with beautiful sculptures of the Hindu deities, religious motifs and geometrical patterns. The lower most level has rudimentary images of Lord Ganesha in the centre while the upper level has images of Brahma-Brahmi, Laxmi-Narayan and Uma-Mahesh. No other Vav in the country is so beautifully sculpted as compared to Rani ki Vav.

Another famous destination which is a must to see is Sahastralinga talav which is situated on the left bank of the river “Saraswati”. It is an artificial tank built by Siddhraj Jaisingh, the ruler of Chalukyan Dynasty in Patan. About thousand of shrines dedicated to Lord Shiva were constructed during this period but now only few are left. It also tells the story of Siddhraj jaisingh and Jasma Odan, a beautiful lady in the tank diggers’ family. She refused to marry him and took her life by committing suicide. It is still believed that tank is dry because of the curse given by her.
But, we will say that if you want to experience the rich and traditional Gujarati architecture, you must make a visit to this place.

It is also a water tank constructed during the period of Solanki rulers in Patan.

This mandir contains manuscripts in Sanskrit and Prakrit which are very ancient and rare to find. Hemachandraacharya was a great scholar and the first one to formulate the Gujarati grammar.
Apart from these great monuments, there are various temples of the Jains and Hindus which also exhibit city rich cultural heritage. The famous being the Brahma Kund, Kalika Mata and Mahavir Swamy Deravar Jain Temple.